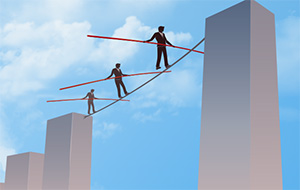 It’s difficult to make predictions, especially about the future.

Risk is a part of the deal that never relates to something good. The word itself is about the potential for “something” to go wrong that is outside of your control. And when that “something” does go wrong, who is going to fix it? Who is going to foot the bill?

The Integris approach to minimizing risk has three main components: structuring the deal to enhance a cooperative (rather than adversarial) partnership, making ownership of various problems clear, and having an agreement that acknowledges the limitations contained in any snapshot-in-time.

Risk Solution: Cooperative Partnership
All too often deals are created with the goal of shifting risk or even hiding risk. A deal that leaves one party overly exposed to risk will result in a situation where the entire project is at risk from the failure of one component. Simply telling the struggling partner, “work harder” is unlikely to lead to success, especially in circumstances where the risk event is particularly unexpected or particularly large.

Good deals emphasize minimizing risk for all parties by maximizing mutual understanding, not by one party trying to foist a poorly-understood or poorly-articulated risk on the other party.

Risk Solution: Each Party Should Own the Risks they Understand Best (and are best positioned to mitigate)
The way to maximize knowledge of risk, and thereby minimize the impact of risk, is to have the party who best understands the risk own the risk. Practitioners know the strengths and weaknesses of their methodologies; they know the costs and tradeoffs of various remedies; they understand the subtleties of the various approaches to mitigating risk within their practice. Logically those practitioners should have primary responsibility for quantifying, mitigating, and responding to such risks. Similarly, there are risks that service buyers are best positioned to mitigate. An easy example would be those around articulating (or not clearly articulating) the business needs and priorities. The closer the party is to the management of the risk, the more likely it is they will resolve the risk in the most efficient manner for both parties.

Risk Solution: The Agreement Must Acknowledge Cooperation and Flexibility
By design, the agreement is a snapshot in time that represents both a business deal and the environment in which the deal functions. But environments change. An agreement that is insufficiently flexible to accommodate a changing environment increases the likelihood that some party to the deal has improperly calculated risk and therefore is more likely to result in a failure for that party and to the project as a whole. Structuring an agreement for flexibility around risk leads to more successful projects.

Work with your partners. Do what you know best. Formalize those concepts in your agreement. The result will be a working relationship that is profitable for all parties.